I arrive now at the ineffable core of my story. And here begins my despair as a writer. All language is a set of symbols whose use among its speakers assumes a shared past. How, then, can I translate into words the limitless Aleph, which my floundering mind can scarcely encompass? Mystics, faced with the same problem, fall back on symbols: to signify the godhead, one Persian speaks of a bird that somehow is all birds; Alanus de Insulis, of a sphere whose center is everywhere and circumference is nowhere; Ezekiel, of a four-faced angel who at one and the same time moves east and west, north and south. (Not in vain do I recall these inconceivable analogies; they bear some relation to the Aleph.) Perhaps the gods might grant me a similar metaphor, but then this account would become contaminated by literature, by fiction. Really, what I want to do is impossible, for any listing of an endless series is doomed to be infinitesimal. In that single gigantic instant I saw millions of acts both delightful and awful; not one of them amazed me more than the fact that all of them occupied the same point in space, without overlapping or transparency. What my eyes beheld was simultaneous, but what I shall now write down will be successive, because language is successive. Nonetheless, I'll try to recollect what I can.

On the back part of the step, toward the right, I saw a small iridescent sphere of almost unbearable brilliance. At first I thought it was revolving; then I realised that this movement was an illusion created by the dizzying world it bounded. The Aleph's diameter was probably little more than an inch, but all space was there, actual and undiminished. Each thing (a mirror's face, let us say) was infinite things, since I distinctly saw it from every angle of the universe. I saw the teeming sea; I saw daybreak and nightfall; I saw the multitudes of America; I saw a silvery cobweb in the center of a black pyramid; I saw a splintered labyrinth (it was London); I saw, close up, unending eyes watching themselves in me as in a mirror; I saw all the mirrors on earth and none of them reflected me; I saw in a backyard of Soler Street the same tiles that thirty years before I'd seen in the entrance of a house in Fray Bentos; I saw bunches of grapes, snow, tobacco, lodes of metal, steam; I saw convex equatorial deserts and each one of their grains of sand; I saw a woman in Inverness whom I shall never forget; I saw her tangled hair, her tall figure, I saw the cancer in her breast; I saw a ring of baked mud in a sidewalk, where before there had been a tree; I saw a summer house in Adrogué and a copy of the first English translation of Pliny –Philemon Holland's– and all at the same time saw each letter on each page (as a boy, I used to marvel that the letters in a closed book did not get scrambled and lost overnight); I saw a sunset in Querétaro that seemed to reflect the color of a rose in Bengal; I saw my empty bedroom; I saw in a closet in Alkmaar a terrestrial globe between two mirrors that multiplied it endlessly; I saw horses with flowing manes on a shore of the Caspian Sea at dawn; I saw the delicate bone structure of a hand; I saw the survivors of a battle sending out picture postcards; I saw in a showcase in Mirzapur a pack of Spanish playing cards; I saw the slanting shadows of ferns on a greenhouse floor; I saw tigers, pistons, bisons, tides, and armies; I saw all the ants on the planet; I saw a Persian astrolabe; I saw in the drawer of a writing table (and the handwriting made me tremble) unbelievable, obscene, detailed letters, which Beatriz had written to Carlos Argentino; I saw a monument I worshipped in the Chacarita cemetery; I saw the rotted dust and bones that had once deliciously been Beatriz Viterbo; I saw the circulation of my own dark blood; I saw the coupling of love and the modification of death; I saw the Aleph from every point and angle, and in the Aleph I saw the earth and in the earth the Aleph and in the Aleph the earth; I saw my own face and my own bowels; I saw your face; and I felt dizzy and wept, for my eyes had seen that secret and conjectured object whose name is common to all men but which no man has looked upon – the unimaginable universe.

I come now to the ineffable center of my tale; it is here that a writer's hopelessnes begins. Every language is an alphabet of symbols the employment of which assumes a past shared by its interlocutors. How can one transmit to others the infinite Aleph, which my timorous memory can scarcely contain? In a similar situation, mystics have employed a wealth of emblems: to signify the deity, a Persian mystic speaks of a bird that somehow is all birds; Alain de Lille speaks of a sphere whose center is everywhere and circumference nowhere; Ezekiel, of an angel with four faces, facing east and west, north and south at once. (It is not for nothing that I call to mind these inconceivable analogies; they bear a relation to the Aleph). Perhaps the gods would not deny me the discovery of an equivalent image, but then this report would be polluted with literature, with falseness. And besides, the central problem -the enumeration, even partial enumeration, of infinity- is irresolvable. In that unbounded moment, I saw millions of delightful and horrible acts; none amazed me so much as the fact that all occupied the same point, without superposition an without transparency. What my eyes saw was simultaneous; what I shall write is successive, because language is successive. Something of it, though, I will capture.

Under the step, toward the right, I saw a small iridescent sphere of almost unbearable brightness. At first I thought it was spinning; then I realized that the movement was an illusion produced by the dizzying spectacles inside it. The Aleph was probably two or three centimeters in diameter, but universal space was contained inside it, with no diminution in size. Each thing (the glass surface of a mirror, let us say) was infinitive things, because I could clearly see it from every point in the cosmos. I saw the populous sea, saw dawn and dusk, saw the multitudes of the Americas, saw a silvery spiderweb at the center of a black pyramid, saw a broken labyrinth (it was London), saw endless eyes, all very close, studying themselves in me as though in a mirror, saw all the mirros on the planet (and none of them reflecting me), saw in a rear courtyard on Calle Soler the same tiles I'd seen twenty years before in the entryway of a house in Fray Bentos, saw clusters of grapes, snow, tobacco, veins of metal, water vapor, saw convex equatorial deserts and their every grain of sand, saw a woman in Inverness whom I shall never forget, saw her violent hair, her haughty body, saw a cancer in her breast, saw a circle of dry soil within a sidewalk where there had once been a tree, saw a country house in Adrogué, saw a copy of the first English translation of Pliny (Philemon Holland's), saw every letter of every page at once (as a boy, I would be astounded that the letters in a closed book didn't get all scrambled up together overnight), saw simultaneous night and day, saw a sunset in Querétaro that seemed to reflect the color of a rose in Bengal, saw my bedroom (with no one in it), saw in a study in Alkmaar a globe of the terraqueous world placed between two mirrors that multiplied it endlessly, saw horses with wind-whipped manes on a beach in the Caspian Sea at dawn, saw the delicate bondes of a hand, saw the survivors of a battle sending postcards, saw a Tarot card in a shopwindow in Mirzapur, saw the oblique shadows of ferns on the floor of a greenhouse, saw tigers, pistons, bisons, tides, and armies, saw all the ants on earth, saw a Persian astrolabe, saw in a desk drawer (and the handwriting made me tremble) obscene, incredible, detailed letters that Beatriz had sent Carlos Argentino, saw a beloved monument in Chacarita, saw the horrendous remains of what had once, deliciously, been Beatriz Viterbo, saw the circulation of my dark blood, saw the coils and springs of love and the alterations of death, saw the Aleph from everywhere at once, saw the earth in the Aleph, and the Aleph once more in the earth and the earth in th Aleph, saw my face and my vicera, saw your face, and I felt dizzy, and I wept, because my eyes had seen that secret, hypothetical object whose name has been usurped by men but which no man has ever truly looked upon: the inconceivable universe. 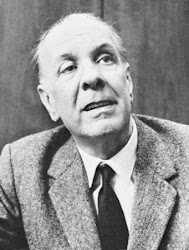 To compile the fragment of the Aleph’s vision -included in the short story The Aleph, from the book The Aleph- by Jorge Luis Borges in at least fifty different languages from all around the world.

To make easier the reading of the most famous moment from Borges’ work for every person in the world.

To promote the interest in reading this great Argentine writer.

To show the diversity of languages and the geographic expansion that Borges’ work, name and figure have reached.

To suggest how a man, a text and a culture (in this case, the Argentine one) can be spread, get mixed up and can affect all the other cultures in the world.